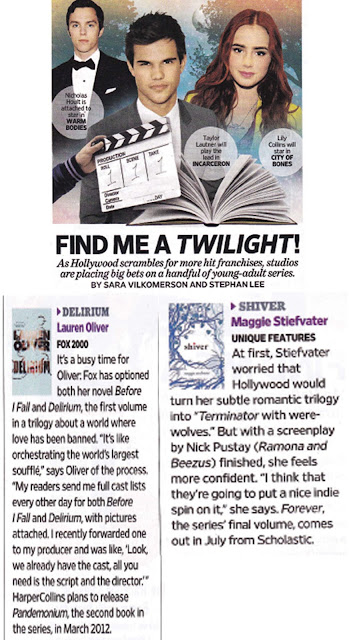 As much as I despise when Hollywood throws around the phrase "the next Twilight!" with it's giddy-greedy green teeth showing because all YA lit that's worthy of film adaptation has to involve vampires and werewolves and para overloaded normal plot points, (Sorry, that's my Team Contemporary --thanks for the term Gayle Forman --ranty side venting. She's a little on edge as of late.) I did a fan-girl dance when I read the Find Me A Twilight! article in Entertainment Weekly's May 24 issue (article excerpt on left). But EW has inadvertently proven my point that all big screen worthy YA is not broody vampires and hunky werewolves...well, some broody werewolves are in attendance with Maggie Stiefvater's Shiver trilogy, but Sam (said broody werewolf) isn't exactly waging epic battles for Grace's mortal life. And I think that's more to my point. An epic battle is not necessary to capture that Twilight-esque theatric magic.

The novel with the best chance at proving that, in my opinion, is Lauren Oliver 's Delirium series, which has not a one broody creature of the night. Instead an oppressive society where love has been declared a curable disease threatens the characters.

When I first heard about this series (from Ms. Oliver herself!) last year, she pitched it as a "dystopian Romeo & Juliet." I pretty much set aside the $17.99 to pre-order the hardcover right then. It's epic emotionally. Lena, the main character, doesn't need a visit from the Volturi to create tension and havoc in her life, she has a date to be "cured" of Amor Deliria Nervosa aka her freewill! I'd face off with Demetri over that life sentence any day.

My second runner up for proving my point is Ally Condie's Matched. Among the new crop of other soon-to-be-adapted YAs that support the paranormal stigma is Kami Garcia & Margaret Stohl's Beautiful Creatures, Cassandra Clare's Mortal Instruments series and Veronica Roth's Divergent.

Despite my rant, I do enjoy the occasional paranormal YA. Anyone who's read this blog, or basically met me, knows I'm a TWI-hard for life--or eternity as soon as Edward agrees to change me. But as someone who writes contemporary YA, I can't help feeling misrepresented in pop culture. It's encouraging to see novels like Before I Fall , Oliver's debut novel which is neither paranormal or dystopian *gasp*, earning some prime Entertainment Weekly real estate. What do you guys think? Is YA seen as a vamp/wolf/zombie fluff fest in the eyes of Hollywood?