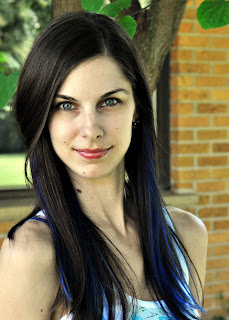 So...my hair is bluuuue! And like all good things it happened sometime around midnight at the response of 3 days spent locked in the Writertorium on the floor (don't ask me why I edit best on all fours) with a box of animal crackers, bottle of ice water, a fan on low to drown out "distractions," and a first, er, rough draft.

Was the dye job reward for working my authorly magic on the draft and molding it into a tastey second draft treat in under a week? ...No. But writing is hard, and sometimes a little encouragement is needed to forge ahead. This particular brand of encouragement can be credited to The Mockingbirds author extraordinaire, Daisy Whitney when she tweeted a pic of her pink hair. I've been talking about dying my hair blue (according to my mom) since I was 4-years-old, and seeing Daisy take the follicle plunge I thought to myself, self, it's about time you stop stalling by saying you'll go blue when you get published and realize going blue might be the edge you need to get published! (Okay, I realized that is twisty, midnight logic, but it was convincing.) Plus now that my crazy's on the outside, people can stop giving me that look when I start talking.

So, what do you think? Has anyone else made a decision so bad it turned out good?